The Story of Layla and Majnun: The Idealization of Love

Editor’s Note: This post is by Wali Ahmadi, Department of Near Eastern Studies, University of California, Berkeley. Ahmadi focuses on the musical history of Layla and Majnun, an Arabian love story which will come to life in Ann Arbor with a new production from Mark Morris Dance Group and The Silk Road Ensemble on October 13-15, 2017. Layla and Majnun. Images from the Heritage Museum.

From my early youth I have been intrigued by the love story of Majnun and Layla, two young lovers from Bedouin Arabia. I remember very well that during long, cold winter nights in Kabul, in the 1970s, my mother would tell us the remarkable story of these two lovers, their intense, splendid romance, and their endless plights leading to their heartrending deaths.

Years later, as a student of literature, I read the Persian romance of Laili and Majnun by Nezami Ganjawi (1140-1209 CE) and then came across several reworkings of this amazing romance.

In brief, Qays ibn al-Mulawwah of the Banu ‘Amir tribe falls in love with his classmate Layla bint Sa‘d. As the two grow older, the intensity of their love increases. Although Layla, too, is truly smitten by love, it is Qays who publicly and unreservedly pronounces his obsessive passion in elegiac lyrics, thus earning the epithet Majnun (literally, “possessed” or “mad”).

Majnun’s incessant poetic expression of Layla’s beauty and his astonishingly outrageous public conduct alarm Layla’s parents. Concerned about their daughter’s reputation as well as the honor and standing of the tribe, her parents ensure that the lovers are kept apart. When Qays’s father asks for Layla’s hand in marriage to his beloved son, Layla’s family flatly refuses the proposal, a response that seems harsh but, in the light of Majnun’s scandalous conduct, not necessarily unreasonable.

As Majnun continues wandering aimlessly through the desert, bonding with wild beasts, living an ascetic life, and composing verses about his obsession with Layla, his father lures him into visiting the holiest of Muslim sites, the Ka‘ba, in the hope of curing him of his obsessive love. There, Majnun pleads to Allah to make him “a hundred-fold” more “possessed” in his love for Layla.

In the meantime, Layla’s father gives her in marriage, against her will, to an affluent, but shallow, man named Ibn Salam. The marriage never consummates as Layla insists on preserving her chastity. She remains faithful to her true love, Majnun, until Ibn Salam dies of rejection, disillusionment, and grief.

A number of times, Majnun is offered the chance to visit his beloved, to speak with her in person. Towards the end of the story, when Layla, through the inter-mediation of a young, faithful devotee of Majnun, appears to him, he still refuses to have physical (or sexual) contact with her. Majnun strives to realize “perfect love” in Layla, a love that transcends sensual contact with the beloved, a love that is free from selfish intentions, lust, and earthly desires.

Precisely for this reason, many commentators have interpreted Nezami’s Laili and Majnun as a Sufi (Islamic mystical) allegorical narrative, where the lover seeks ultimate union with, as well as annihilation in, the Beloved (i.e. the Divine or the Truth). Majnun’s harsh life in the desert, then, has been compared to the ascetic life of Muslim mystics who rejected earthly pleasures and renounced worldly affinities.

Accordingly, his excessive devotion to Layla represents his unique and steadfast devotion to Ideal Love, the Divine—which explains why, in spite of his incessant yearning for his beloved Layla, he is incapable of physical intimacy with her. It is with the idealized image of the beloved—in the person of Layla—that Majnun is infatuated. When Layla falls mortally ill and passes away, Majnun, too, loses his one and only purpose in life, his sole means towards the realization of True Love. When he learns about the death of his beloved, he at once seeks her gravesite. Weeping and moaning, he presses himself against her gravestone and breaths his final gasps, and dies. The lovers ultimately unite, but only in death.

Nezami’s romance of Laili and Majnun is a multilayered, complex text, which makes  it open to contrasting, and perhaps contradictory, readings. While a Sufi (mystical) reading of it is plausible, one can justifiably read it as a conventional, yet immensely rich and enthralling, love-story. Despite the abundance of mystical motifs and metaphors, the profane dimensions of the poem cannot be overlooked.

Nezami’s unparalleled narrative proved considerably influential during the subsequent centuries. While allusions and references to Layla and Majnun can be readily found in divans (collections) of poets before Nezami’s time, his version led several noted poets, in a host of languages, to compose original texts modeled after Nezami’s work. In Persian alone, one should mention Amir Khusraw Dehlawi’s masterpiece Majnun and Laili (completed c. 1299) and ‘Abd al-Rahman Jami’s Laili and Majnun (composed c. 1485). Other notable renderings of the story are by Maktabi Shirazi, Hatefi, and, more notably, Fuzuli. The latter became considerably influential in Ottoman Turkey. The romance of Layla and Majnun has also been made into several popular films and movies in Hindi, Turkish, Arabic, and Persian.

Wali Ahmadi is an associate professor of Persian literature at the University of California, Berkeley. His publications include Modern Persian Literature in Afghanistan: Anomalous Visions of History and Form (2008) and Converging Zones: Persian Literary Tradition and the Writing of History (2012). He is currently working on the cultural politics of modern Persian poetics and aesthetics. 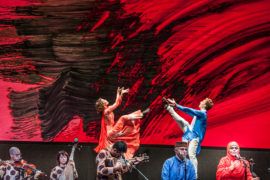 Exhibit: Of Love and Madness On the music of Layla and Majnun: Into the Divine