Does where you sit affect how you feel about a performance?

Earlier this month, the New York Times published a really interesting series of articles that tackled the question, “does where you sit affect how you feel about the performance?” In the series, four NYT dance critics give their take on different views of a City Ballet performance in New York City’s David H. Koch Theater: the chief critic Alastair Macaulay in the first ring, critics Roslyn Sulcas and Gia Kourlas in orchestra, and Ms. LaRocco from her view three rows from the very top of the theater. (Check out the NYT series here: parts one, two, and three.)

The UMS Student Board was inspired to take a similar look at the views from Ann Arbor’s Power Center, using the February 18th & 19th Merce Cunningham Dance Company performances as their lens: Cathy Cao near orchestra, Rheme Sloan in center balcony, and Lena Cintron on the main floor. Read on for a snapshot of the view from their seats and tell us: where do you prefer to sit?

CATHY CAO: I was very happy to see the seat on my ticket (section 5 row Q, seat 10), because I always love sitting at the partial view seats along the sides of the  orchestra section. It excites me to see into the wings, and watch as dancers prepare before their entrance onto stage.  Once on stage, a dancer has a projected presence of playing a part or a role, however seeing them backstage feels intimate.  It feels like I am sharing in that private moment with the dancer, as she/he is about to burst onto stage; I am sharing in that moment of held breathe, of anticipation and excitement, of passage from a regular person to the character she/he is about to dance on stage.  Cunningham’s “Squaregame” is the perfect example, since all the curtain dividers were raised. The dancer’s behind-the-stage-activities were all fully exposed to me as were the brick walls, folded sets, and extra equipment scattered haphazardly that were usually hidden behind the velvet black divider. I was more than willing to give up my vision of a small corner of the stage when I was able to share in so much more.

Cathy Cao is a Junior at University of Michigan’s Residental College, studying Dance History and Cultural and Community Development. In her free time she likes to see as much dance as possible and practice some herself.

RHEME SLOAN: I watched Friday’s Performance of the Merce Cunningham Dance Company from the center section in the balcony. In “Squaregame” I could see the shapes in the choreography. The spatial setting that Cunningham created was clearly defined because each corner of the dance floor was visible from my seat. I thought that the cross floor patters the dancers executed were clear and precise throughout. Having such a clear view of the entire stage was a great advantage to enjoying this piece.

“Split Sides” was also wonderful based on the fact that I could see all that was happening on stage. Although I couldn’t see the tops of the backdrops, the view of the dancers was incomparable. Especially in ensemble work like Cunningham’s, balcony seats are the definite way to go.

Rheme Sloan is a first year Voice Performance student in the School of Music, Theater, and Dance. Although he is studying voice, he loves experiencing all performing arts and culture.

LENA CINTRON: I was in the middle of the second row and the view was spectacular.  I could literally see the sweat dripping from the dancers and watch their breathing.  In “Squaregame,” when the stage was stripped bare, I could see the dancers in the wings stretching and preparing to come to the middle of the stage.  This seat was ideal, no movement was missed.  In the second half, when the curtains were up again, dancers seemed to float onstage from nowhere and float away just as easily.  For both dances I felt like I was seeing exactly what I was supposed to and missing anything that subtracted from the power of the dance.

Lena Cintron is a student at the University of Michigan studying Linguistic Anthropology and Creative Writing.  Her favorite thing about Ann Arbor is the access to great performing artists.

So tell us, where do you like to sit?

Truly Render is a working mama and arts enthusiast extraordinaire. She is the Press & Marketing Manager for UMS. 15/16 will be her sixth season with UMS. 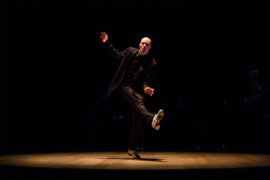 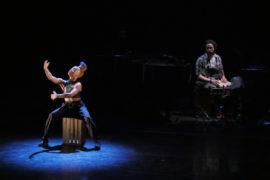 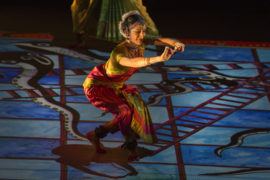