Molly Schwall is a 2022-23 UMS 21st Century Artist Intern and a U-M senior majoring in Musicology with minors in Performing Arts Management & Entrepreneurship, and History. She spent the summer in California with Wild Up, a chamber orchestra led by Christopher Rountree, and shares her experiences below. Wild Up brings Julius Eastman’s “Feminine” to Rackham Auditorium on April 16, 2023.

This summer I had the absolute privilege of being selected as a 21st Century Artist Intern through the University Musical Society (UMS) at U-M. The fully funded internship program pairs students to travel, learn and work with ensembles performing in the upcoming season. I have aspired to get into the program since I first learned about it as a freshman, so it was a dream come true to be selected.

I was paired with the indescribable avant-garde, experimental Grammy-nominated chamber orchestra Wild Up led by founder, conductor, and creative director Christopher Rountree. Since graduating from Michigan with a master’s in Orchestral Conducting in 2009, Chris and I bonded about our time at U-M over several meetings at various coffee shops and quintessential LA lunch spots – naturally exposing me to new parts of the city along the way. Chris was the most generous, caring, and informative mentor I could have asked for throughout this experience. He took so much time out of his busy schedule to invest in helping me learn more about the foundations and upkeep of Wild Up, including the ins and outs of management, grant writing, intentional artistic programming, and how a board works.

Wild Up is managed by David Lieberman Artists’ Representatives, and I had the chance to meet with their marketing manager to compare strategies and techniques for promoting multiple artists at the same time. Chris introduced me to so many important artists, patrons, and administrators sparking connections that will last a lifetime. The positive energy and embrace I felt from everyone I interacted with were infectious. I was delighted to be surrounded by so many brilliant creatives and felt right where I belonged.

Creator Ron Athey stands in front as he delivers an extreme live performance prior to the premiere of his 10-minute short film “Pasaiphaë” at the LBO Film Festival.

Rountree additionally works as the Music Director of the Long Beach Opera and treated me to tickets to the inaugural LBO Film Festival. After a delightful day exploring Long Beach’s many thrift and knick-knack shops, I witnessed several standout performances including Dorian Wood’s live cover of Teo Hernandez’s “Salomé” soundtrack accompanying the film.

Coincidentally, one of my mentors and friends Ken Fischer (UMS president emeritus) was visiting Los Angeles the same time I was there. Ken’s invited me to an inventive production of “The Valkyries” at the Hollywood Bowl with the Los Angeles Philharmonic, Yuval Sharon, and the Detroit Opera. I was surrounded by and introduced to various influential artists including a filmmaker, the wife of the concertmaster, the artistic director of the show, as well as one of the founders of SMTD’s EXCEL program. The show utilized green-screen technology to project an extraterrestrial set on the screens throughout the venue. These two performances innovatively intersected digital media with opera – something I had never seen before, but am expecting to witness a lot more of in the future.

Overall, during my time in LA, I was exposed to an eccentric mix of new music, performance art, and unique concert experiences. I have a completely new appreciation for the future of classical music, and a new awareness of the limitless potential for creative expression. My education and exposure to these new art forms began before I touched ground at LAX. Before arriving in California, I began working with Wild Up virtually, helping them prep for their 24-hour performance of Julius Eastman’s “Buddha”.

Wild Up is currently cultivating a series of performances and a multi-volume anthology on the queer, Black and historically undervalued composer. The group released the first recorded part of their anthology, Volume 1: Feminine, was released in 2021, and Volume 2: Joy Boy was released while I was working with them. I assisted with album promotion for “Joy Boy” and spent time transforming the group’s Instagram account to match their aesthetic. After conducting extensive research on other successful artists’ social media accounts, I was able to improve marketing strategies and gain the group over five hundred followers within four weeks. 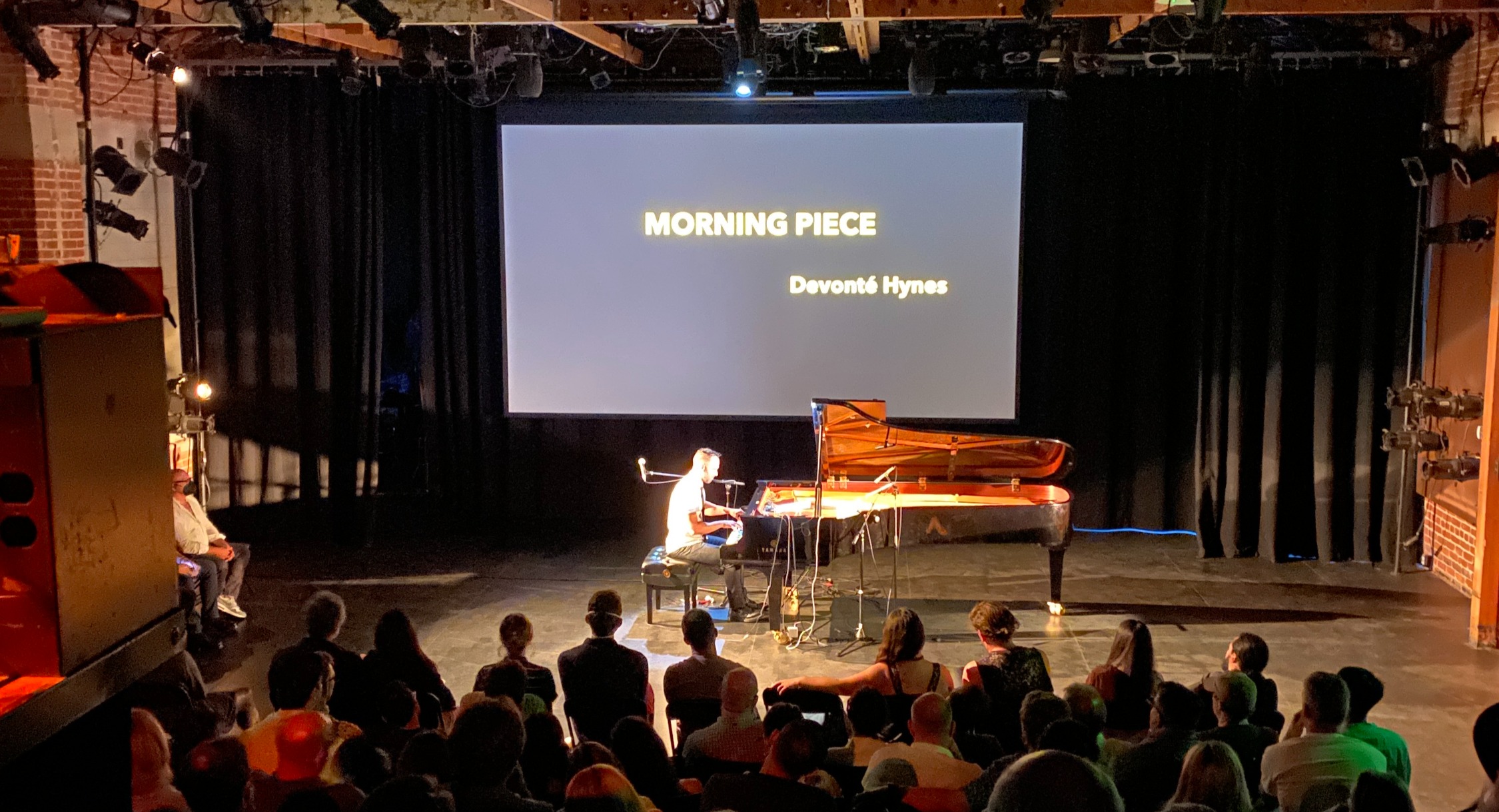 Along with promoting shows, I was additionally able to incorporate my love of videography to film content for the group, beginning with the West Coast premiere of Adam Tendler: Inheritances. The pianist spent his inheritance after his father’s death commissioning sixteen new works. My two favorite compositions were the opening “Remember I Created You (story with instructions)” by Laurie Anderson, including a voice recording by her, and Devonté Hyne’s “Morning Piece”. I knew Hynes from his alternative hip-hop work Blood Orange and was delighted to listen to his classical work and be in the same space as him.

The second Wild Up presentation I attended was the first part of their Floating residency, a collective that hosts sound baths and sonic events in unique outdoor settings. The collaboration included a debut performance of “Music at Sunset for Three Voices” composed and created by Catherine Brookman, Eliza Bagg, and Kathryn Shuman with an opening experimental hurdy-gurdy performance by Marta Tiesenga. The performance took place at the secluded and acoustically sound Bronson Canyon, with a clear view of the Hollywood sign. Throughout the performance, the audience was free to lie down and birds freely responded to the sound waves. I captured video footage at the event as pictured below. Wild Up is an innovative group as they present events beyond their core ensemble, though the final performance I worked on included the band itself. Prior to the performance of Eastman’s “Feminine” at the Broad art museum, I took photos of the group at a rehearsal at Hollywood Scoring, where a plethora of famous movie soundtracks has been recorded including La La Land and Ratatouille. I did not have much past experience photographing musicians but was satisfied with my progress, and continued to capture the dress rehearsal at the Broad. I attended several band hangs at local breweries, and Chris included me in the pre-show ritual before the performance – it truly felt like I was part of the group. Beyond my time with Wild Up, it was incredible to explore LA on my own. While renting a room in Silver Lake, I became acquainted with bike trails along the LA River, Echo Park, local farmers markets and coffee shops. I additionally enjoyed visiting the Griffith Obervatory, Huntington Library, and attending two KCRW summer nights in China Town and UCLA’s Hammer Museum. I went to the beach several times, reconnecting with West Coast friends I hadn’t seen in years, and making lots of new ones along the way. My first time in California, Los Angeles had always seemed like a daunting place for narcissistic wannabees where dreams go to die. My generalizations about the city were dissolved as soon as I got there, and I can not wait to go back. The best part about this program is that it’s an exchange. Wild Up will perform Feminine on April 16th, 2023 in Rackham Auditorium and I can not wait to see everyone again, and share the group with my Michigan friends.

Learn more about Molly at mollyschwall.com.